We expect any day in February to be quite cold so it was no surprise to have a forecasted temperature between zero and four degrees Celsius! All dressed up in extra warm clothes and carrying a spare jumper I set off to join the group last Sunday.

There was lying snow under our feet at Moscar which crunched as we walked and patches of snow remained in various places on the slopes around us making very nice patterns. In the distance on the higher ground of Derwent Edge the remains of last week’s heavier snowfall lay solid and gleaming in the sunlight.

We ran out of snow after about an hour and the paths were very muddy in places. However, a short snow shower in the late morning, brought a cold wind and heavy sky. These conditions are often followed by dramatic light, and as the shower died away, the remaining black clouds were backlit by a brilliant yellow/white sun. Later in the day as we passed through the woods in the Loxley Common area, the low angle of the sun shone through the trees casting long, hard-edged black shadows.

Water always provides interest in a scene, and on this walk, both Dale Dyke and Agden reservoirs were most attractive; the first was rather dull but a gentle breeze was rippling the surface, and the second reflected a blue sky against the light surrounded by the shapes of jet black leafless tree branches.

I often think that when conditions may be hard as they can be in winter, walking with a group allows us to venture out when we might not otherwise feel confident to do so, and the camaraderie helps to keep us all cheerful if we get a bit cold or the mud is a nuisance. Every season has something to offer. 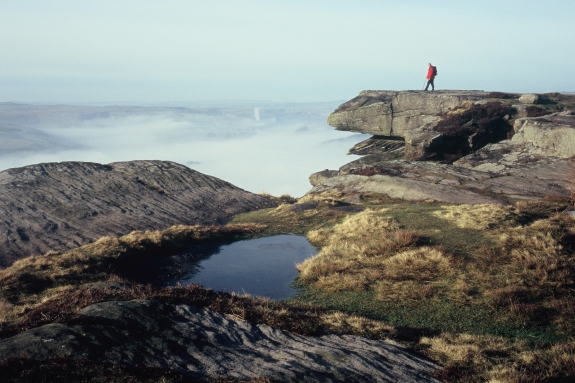 Sunday 8th October dawned cloudy with the promise of sunshine later. With Autumn tinges already appearing I was full of expectation, and I was not disappointed. The walk would take us via More Hall and Broomhead reservoirs, over White Lee Moor and down to Low Bradfield.

The colours along the avenue of trees alongside More Hall reservoir were stunning; shades of brown, and gold gleaming in the bright sun with a blue sky behind the branches and glistening highlights on the water. Other woodlands had newly fallen oak, or beech leaves on the ground along with spikey sweet chestnuts, polished horse chestnuts, or pine cones.

Around lunch time on White Lee Moor we had extensive, views of the moorlands, which were just so photogenic with the bronze of the dead bracken and the shifting shadows from a dramatic sky, with its silver-lined clouds . Here and there isolated trees stood partly leafless, green patches of agricultural land poked into the brown and a buzzard caught our attention.

Close up we observed a few patches of heather with a little colour remaining, some bilberries and red hawthorn berries, and a number of different fungus types. The red fly agaric with its creamy spots is always a lovely sight and looks as if it should have a gnome sitting on it!

We were a group of thirteen today and most of us finished off with a relaxing social chat and drink at a pub, it was the perfect conclusion to a perfect Autumn day out, and to think that I nearly stayed at home that day! I would have missed out. 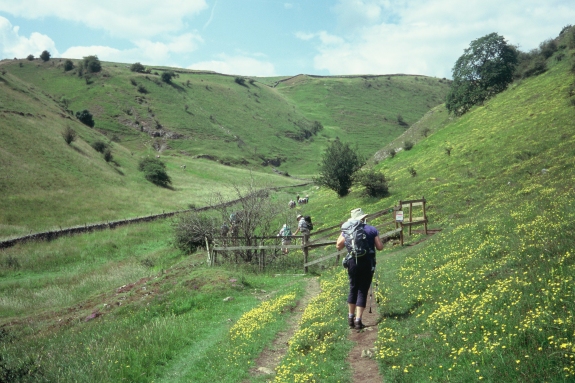 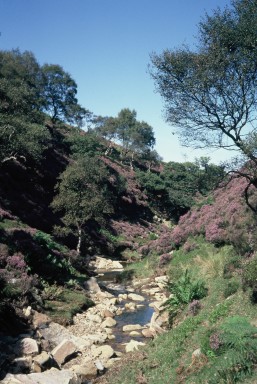 We learned some interesting things on last Sundays walk around Thurgoland and Silkstone Common. It was a pleasant summer’s day with the clouds and the sunshine taking turns to dominate, and a refreshing warm breeze kept it from becoming too hot. We walked alongside the River Don, which was in the shade of trees at coffee break, but that just made the fish that jumped out of the water look bright by contrast. The dappled shade was very attractive.

A highlight of summer is always the flowers, and we passed many lovely cottage gardens. Towards the end of the day, across the valley ahead we saw a whole field of orange-red poppies standing out against all the nearby green fields – a beautiful sight!

Rumtickle old railway viaduct was the usual Victorian style, but we were intrigued to see a memorial stone, high up, to a worker who was killed during its construction. At lunch time in Nabbs Wood we sat beside the memorial to the Huskar Pit mining disaster in July 1838, when 26 children were drowned. The sculpture is of two children crawling out of an underground cave. Both are poignant reminders of working conditions in times past.
It was good to have leaders who could help me to learn more about the area, it certainly added to the day’s walk. 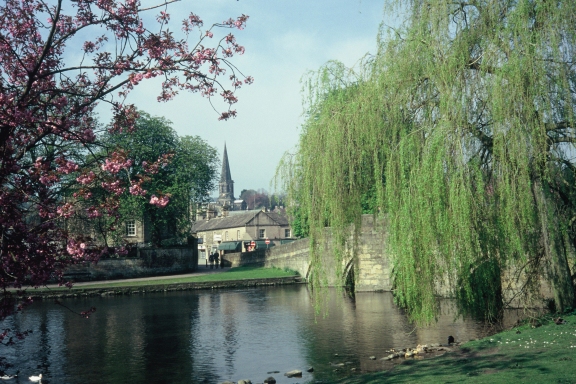 Sunday 23rd April was a beautiful Spring day in the Peak District, we had warm sunshine with a cool breeze and clear blue sky. Who could ask for better walking conditions?

The landscape was really waking up after winter; leaves on trees were partly open so we could see through them to the blue sky beyond, masses of pink or white blossom were everywhere,(There was a stunning example near the river in Bakewell), carpets of blue forget-me-nots and anemones added extra colour.

Birds were singing all around us at lunch below Monsal Head. I identified chiff-chaffs, wood warblers and great tits, and a robin hopped around as we sat in the sunshine on the Monsal trail.

The water in the River Wye was so clear, and it sparkled like a gem as we concluded our walk at Ashford-in- the-Water. We spent a few minutes watching trout from the bridge.

It was all done at a speed that allowed us time to enjoy the treasures of Spring, and have time for ice-creams as well! Do come and join us, it is a really good way to experience all that nature has to offer.

Our recent car ramble to Tissington attracted eleven participants. Occasionally the Group uses cars instead of public transport so we can walk in places that are no longer served by buses or trains. It adds a bit of variety to the walks programme. Members with cars offered lifts to those without and seats were allocated on a first come – first served basis.

Tissington is situated in the south of the White Peak, and is a lovely estate village, with a very attractive pond in which a coot was nest-building, and a stream on which there are six wells, running down the main street. It also has an interesting seventeenth century hall (1609) .

Other villages were equally pretty. Lunch stop was by the pond in Parwich, which also had a pond and a stream feeding it. On previous occasions I had seen a water vole here, but not this time. We chose a route that took us beside the stream as it curled along the backs of cottages and over small bridges to the village green, all dotted with clumps of daffodils. Later in the day, we had a really lovely view looking down on Alsop-en-le- Dale sitting in an obvious hollow in the hills for protection from the worst of the elements.

The area is one of undulating fields with ever-changing views of the grey/white limestone scenery. The ground had largely dried out after the recent heavy spell of rain so walking was less muddy than I expected. The day was fine and clear so we had good views of the stone wall patterns and hilltops crowned with copses of trees, some of which were just coming into leaf after a mild winter. Small kissing gates rather than stone stiles are characteristic of this area, I think these look quite attractive nestled in the hedges, and along with the wooded streams, low hills, rocky outcrops and meadows they make for a series of quaint corners. Our view down into craggy-sided Dovedale was stunning. Near the end of the day we walked on part of the Tissington Trail. This uses the route of an old railway track, which is on high ground in places affording good views.

A cup of coffee in the café at Tissington rounded off the day nicely!